Skip to content
Health News
By News Editor
No Comments

The organization had earlier in a press release by its Nigeria Country Manager,Damilola Oshinowo announced donation of the projects to two communities in the state.

The beneficiary communities are Odo Ayedun-Ekiti and Oke Ako-Ekiti, both located in Ajoni Local Council Development Area in State.

The projects were commissioned on Tuesday by the Ekiti State First lady, Her Excellency Erelu Bisi Fayemi in the presence of Dr. Anton C. Bizzell, the Group Chief Executive Officer of Bizzell Global.

The project facilitated by the 2023 Candidate of the All Progressives congress APC in Oye Ikole Federal Constituency ,Hon. Akin Rotimi has a standard borehole 100m deep powered by a Grundfos grade 1 solar powered pump of over 120m capacity.

“The facility comprises a 5,000 liters capacity ground tank that first steps down the water received from the water table before transmitting through two fiber cylinder bottle water treatment plants, and then sends the water to the 10,000 liters overhead tank before delivery to the water point platform to be fetched by end users in the community.

“It is powered by state of the art energy efficient solar panels. The two identical projects are sited in Odo Ayedun and Oke Ako communities.

“The projects were donated as part of Bizzell Global’s corporate social responsibility and is in furtherance of SDGs Goal 6 on Clean Water and Sanitation. It is particularly geared towards expanding international cooperation and building capacity in developing countries for water and sanitation related programs.”

The commissioning of the projects was preceded by a ceremony at the palace of the traditional ruler of Odo Ayedun-Ekiti, His Royal Majesty Oba Dr. Solomon Ilesanmi Ajibade JP (Ajigbotoluwa I), the Owa of Odo Ayedun, who expressed his gratitude on behalf of the community, and conferred the chieftaincy title of Balógun Akórewọ̀lú of Odo Ayedun-Ekiti on Dr. Anton C. Bizzell, in recognition of his contribution to the development of the community. Dr. Bizzell, an African-American who traces his ancestry to Nigeria was also named ‘Ọmọ́wálé’ and welcomed as a son of the community.

In his remarks, Chief (Dr.) Anton C. ‘Ọmọ́wálé’ Bizzell, thanked the community for the honour bestowed on him, saying he was “glad to be back home”.

He commended the facilitator of the project Mr. Akin Rotimi and other community stakeholders for working collaboratively with Bizzell Global to deliver the impactful project, while encouraging other corporate organisations around the world “to work closely with communities and local organizations to create solutions that tangibly improve the standard of living.”

The State first lady, Erelu Bisi Fayemi, on behalf of the Government of Ekiti State expressed appreciation to the Bizzell Group for the kind gesture and appealed to them to favourably consider scaling up the intervention to benefit more communities

“You will find the Government and people of Ekiti state – the land of honour – to be people of integrity, who will always follow through with commitments they make to you and ensure such interventions are protected and well maintained.”

She further admonished the beneficiary communities to justify Bizzell’s kind gesture by taking care of the facility sustainably.

The facilitator,Akin Rotimi said that” the initiative goes a long way in consolidating the cordial relationship between the Federal Republic of Nigeria and the United States of America, and is a demonstration of citizen diplomacy championed by well-meaning Americans in collaboration with Nigerians who have worked together to deliver the project”.

The chieftaincy and commissioning ceremonies were witnessed by a mammoth crowd from the community, as well as senior government functionaries, traditional rulers, and other community stakeholders.

“Bizzell is a medium-sized governmental and management consulting firm, headquartered in New Carrollton, Maryland with additional, international satellite offices around the world (including Tanzania, Democratic Republic of the Congo, Nigeria, Uganda, Thailand, and Guatemala). Founded in 2010, Bizzell Global’s mission is to foster positive global impact by working with ministries of health and economic development in various jurisdictions to create flourishing, sustainable communities. Bizzell Global works with the U.S. Agency for International Development (USAID) and the Centers for Disease Control and Prevention (CDC) to advance public health interventions, policies, programs, and systems in response to current, emerging, and future public health threats and diseases. 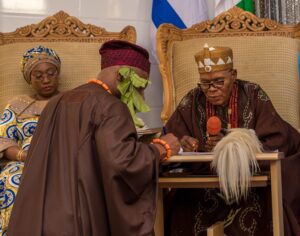 Man  beaten to death in Edo over alleged motorcycle theft